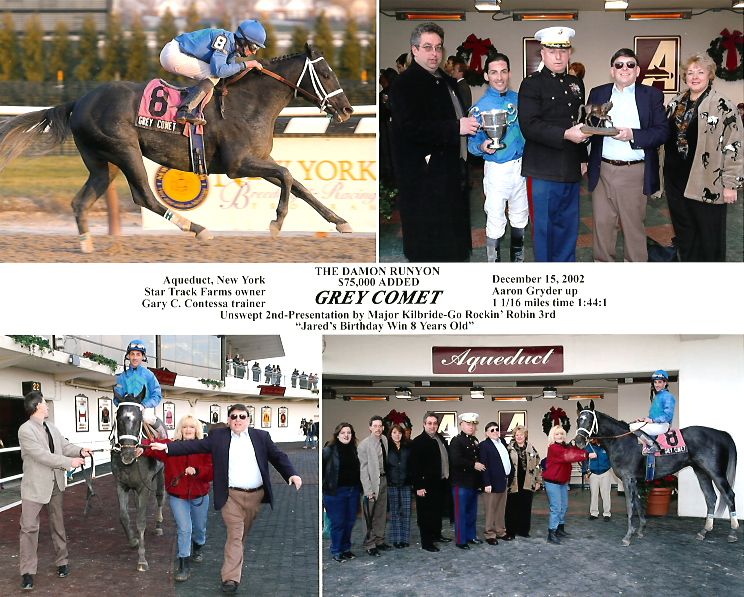 Star Track Stable was started in 1960 and has raced for nearly a half century.

The extensive backgrounds of the team members provide co-owners with a highly experienced group of individuals and with a strong focus on integrity and community service both in the equine community and the business community.

Bob Fox has been involved with thoroughbreds for nearly 40 years and his extensive experience in many areas of the thoroughbred business from bloodstock and syndications, to television, written and radio media, to equine art, to personal relationships developed over the past four decades with many of the thoroughbred industry’s most renown leaders and racing personalities, is certainly among the most varied and comprehensive in the industry.

Among Robert’s achievements in bloodstock are the purchase or sale of such stars as Devil His Due (Leading Money Earner of his crop and sire of 2005 Dubai World Cup-G1 winner Roses In May), Criminal Type (Horse of the Year), Midway Lady (Epsom Oaks-G1), Love Smitten (Defeated Horse of the Year Lady’s Secret in Apple Blossom H.-G1 and dam of Swain-G1), Carson Hollow (Prioress Stakes-G1 and NY Bred 2002 Horse of the Year) to name just a few.

Much more information regarding Robert and his achievements and background in the thoroughbred industry can be found at his website www.robertsfox.com.

Peter’s thoroughbred interests continue in areas of equine memorabilia through the Peter and Robert Fox website at www.championsgallery.com and his current involvements in the industry include the sales and marketing of the high quality L’Arginine product Cardio Cocktail for horses. Peter also provides the web design for Champions Gallery.

Robert A. Modansky is a principal and CEO of Lazenby & Associatess and is a Certified Fraud Examiner (CFE). Within the industry he is an esteemed speaker and well-regarded nationally as an industry expert.

Bet on horses at the Bovada Racebook and when you join and redeem one of these Bovada bonus codes, you can get up to $3,750 in bonuses! Click here to learn more.